HOME
ABOUT US
PRODUCT
SOLUTION
SERVICE
NEWS
CONTACT US
More

Heavy snow is the twenty-first solar term in the twenty-four solar terms. The time point is around December 7th of the Gregorian calendar, and the yellow sun of the sun reaches 255 °. Heavy snow is the third solar term in winter, marking the official start of the mid-winter season. It reflects the start time and degree of snowfall during this period. It is the same as the solar terms such as light snow, rain, and valley rain, and it is the solar term for precipitation. After heavy snow, affected by cold air, large snowfalls often occur, causing snow on the ground.


Enjoying the snow scene
In the heavy snow season, people enjoy the snow in the snow. The Southern Song Dynasty's "Wulin Old Things" Volume III said: "Snow in the Forbidden City, Du Yumingyuan Tower, the backyard enters the size of a snow lion, and is decorated with golden bells, and made of snowflakes, snow lights, snow mountains and the like Crispy flowers and events, and a golden pot for the enjoyment. "This vivid text describes the snowman and snow-capped mountains in the royal city of Hangzhou in heavy snow. Night work
The heavy snow and solar terms are short in the day and long in the night. In ancient times, the workshops and homework of the hands began to work at night, commonly known as "night work". The hand-made textile industry, embroidery industry and dyeing house had to eat night meals late at night, so there was "night cooking" and "night supper". In order to meet this demand, various snack stalls have also opened night markets one after another, and the business is booming until the end of the Wuchang period. 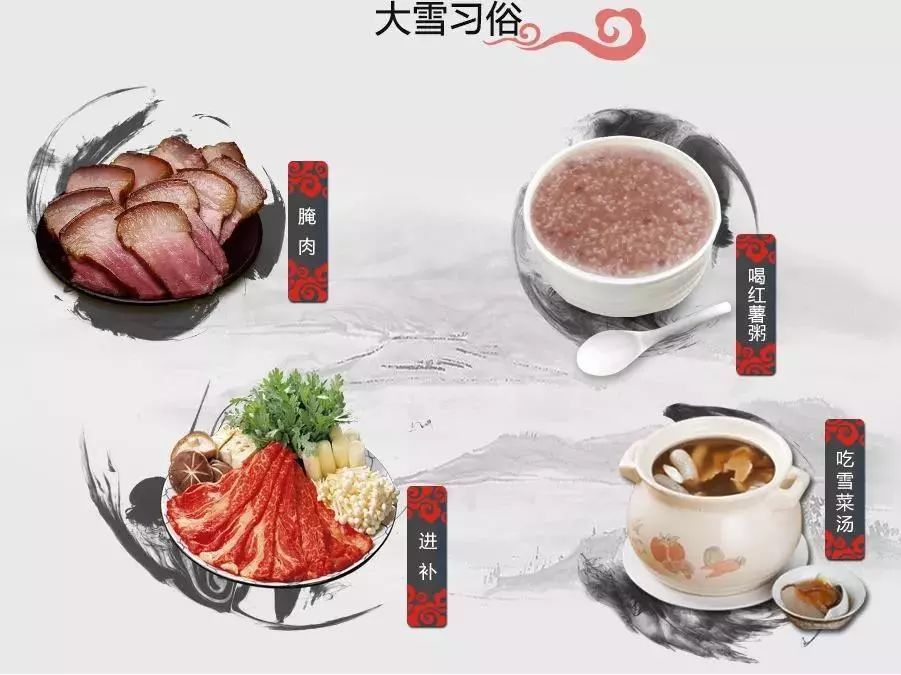 Bacon
"Xiaoxue pickles, Daxue bacon", "Before the New Year, fatten the eaves" said the custom of Daxue solar terms, that is, bacon. As soon as the heavy snowfall arrives, every household is busy pickling "salty goods", whether it is poultry or fish, people use traditional methods to process delicious food to meet the coming New Year. The custom of heavy snow bacon has a long history. It is the same as the firecracker's origin and it is related to the year. "Nian" is a fierce monster with sharp horns. Every New Year's Eve, it will hurt people. In order to avoid harm, people do not leave their homes at the end of the year, marinating and storing meat, fresh vegetables are preserved by air-drying.